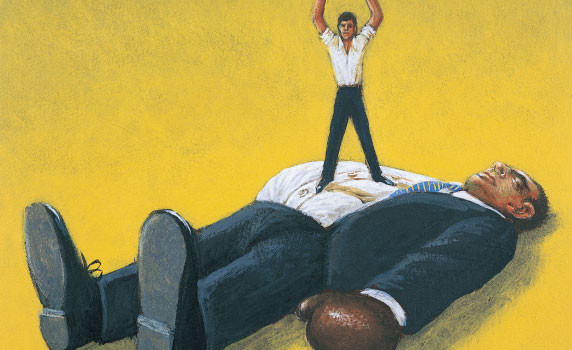 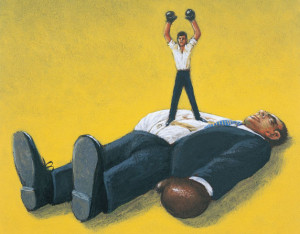 Identify a problem and solve it.

Make it easier, faster, even more enjoyable – just improve it in some way.

You don’t have to reinvent the wheel to strike gold. In fact improving something which is already popular – even if it’s just by a few percent – is the secret to many entrepreneurs’ success.

We talked a little about Richard Branson the other week. He’s always wheeled out whenever anyone talks about entrepreneurship. Why? Because he pretty much made it from scratch and had to overcome a lot of obstacles (dyslexia, a string of business failures, marriage breakups) and yet built a wildly successful business empire that continues to thrive. Underneath those Jesus-ey locks he also comes across as a really, genuinely likeable guy.

But you know what? When you only ever hear about the same superstar entrepreneurs: the Richard Bransons, the Alan Sugars, the Donald Trumps it makes you wonder whether there is anyone else out there being successful and making it happen.

What about the so called ‘little’ people – people with normal jobs, lives, dreams and aspirations – how often do they make it?

Forget our troubled economy for just a moment, because there are hundreds of success stories every day.

Here’s one of them…

A close friend of mine (who is incidentally quite little at 5ft!) noticed a couple of years ago that vintage clothes and furniture were fast becoming the ‘in thing’. Not just in London but in cities and villages across the UK.

She noticed that the cool crowd were attacking flea-bitten charity shop clothes rails in a bid to find something unique and original… for a good price.

And the fever for vintage has spread. It’s not just charity shops – there are now retail outlets dedicated to selling vintage clothes and housewares for profit. They’re springing up everywhere.

This is big business. Vintage sells.

So going back to the mantra: “Identify a problem and solve it.”

What’s the ‘problem’ here exactly? How could anyone make the experience better or easier?

Well she thought about what the main hassles associated with vintage shopping were and came up with the following:

– It can be tiring – Traipsing between little vintage shops which are often miles apart is tiring
– It can be frustrating – Often you have to wade through a lot of tat to get to the good stuff
– It can be a lottery – Sizing is often a bit of a lottery in charity and vintage shops. As items are ‘one-offs’ you can’t ask for a garment in your size.
– It can be time consuming – Unless you’re a full-time hipster (cool) it’s hard to stay on top of where the good shops are and track down the best buys

In other words being a successful vintage shopper requires time, patience and quite a bit of insider knowledge. Now for some people that’s one of the big draws… but it’s also a major limiter in terms of the potential market you can reach out to.

So the main problem is one of convenience. We’ve been spoilt by the Internet with most shops letting us browse their collections online from the sofa, pay instantly and get delivery direct to our front doors.

Why can’t vintage shopping be the same?

There’s no reason. The main stumbling block is simply that most shops aren’t tech savvy and – more importantly – don’t have enough stock to fill a whole website. So here’s what my friend came up with…

She’s made a fantastic website called Voutique (as in vintage and boutique). It’s a simple, user friendly place where people can browse for vintage clothes. You can see it here if you’re interested:

The really clever bit is that she’s approached all the vintage shops and got them on board uploading their stock onto the site (it’s literally just a case of uploading a photo and specifying the price).

She’s also added a payment facility and sorted out a delivery service so that anyone can now shop online for vintage just as easily as if they were buying something from Amazon or eBay.

I think this is one of the smartest ideas I’ve heard about in years. Not only that, it’s well executed.

What about time, money, experience?

Actually she’s brought this to life from humble beginnings. She worked on this while she had a full time job – doing the planning and much of the prep work in her spare time and on weekends.

She got friends to help with a lot of the costly work – for free. So she got a photographer friend to shoot some of the cover models (the models themselves were either friends of students).

She asked techie friends questions on Facebook. She even got me to do some of the copywriting (poor thing). Her biggest expense was getting the website built.

Once the project was becoming more of a reality she then took a big leap. She quit her job to focus on it fulltime. The banks were putting up some money (so she knew it had legs) and she realised that to make it a roaring success she was going to have to focus on it full time. This is the risk element – there’s no escaping it.

She’s only been live a few months and already it’s going gangbusters.

It’s such a simple idea and yet so tuned in with growing trends.

I hope this shows that with the right determination anyone can uncover the next big thing – not just the Bransons or Sugars of this world. Think about what you could do.

Remember it’s not reinventing the wheel. Look for trend… identify a problem and solve it.

2 Responses to How ‘little’ people can become big entrepreneurs