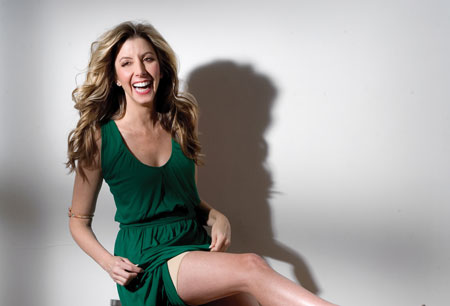 How these ripped tights made Sara Blakely a billionaire 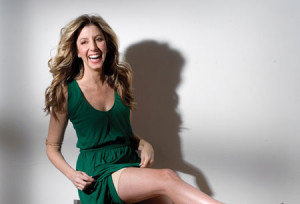 She used to work as a saleswomen cold calling people, trying to sell fax machines… now she’s a billionaire thanks to a simple invention she discovered simply by hacking into an old pair of tights!

How did she do it and what can we learn from her incredible story?

Sara Blakely was 29 when she came up with brand new clothing accessory by experimenting with a pair of tights.

She didn’t like it when the shape of her underwear could be seen through her trousers or skirt so she customised (and by customised I mean chopped the feet off) a pair of tights to solve the problem. The tights created a “smoothing effect” on her behind hiding the underwear lines while the tights remained hidden below the knee – magic!

This worked a treat, except now they would roll up her legs, causing discomfort. Convinced it was still a great idea she pumped her life savings, just over £3,000, into developing her tights into a product that would maintain that firm, smooth look but still stay in place.

Before long ‘Spanx’ was born with the slogan “We’ve got your butt covered”.

Then came the ‘sales bit’…

Sara went about harassing buyers at major department stores, never taking no for an answer, and eventually managed to secure some major orders for her shape flattering leggings.

Instead of spending money that she didn’t have trying to put ads on TV or in the magazines she gave her product to celebrities to try, most notably Oprah Winfrey, who went on to feature it on her show.

The orders came flooding in and Spanx now has a turnover of more than $250 million.

More celebrities jumped on the bandwagon including Sara Jessica Parker, Gwen Stefani… even Jonathan Ross admits to being a fan of the Spanx tshirt which can help give men a more shapely torso.

Spanx products are sold in more than 11,500 shops in 40 countries and the company is valued at just over $1 billion.

Not bad for a pair of old tights is it?

Now I know a lot of Insider’s Edgers have big plans and big ideas but sometimes feel overwhelmed by where to start and what to do.

Something I always try to hammer home, like an inebriated woodpecker, is that you don’t need a fistful of fancy degrees or a highflying job at a big business to be a roaring success.

The most successful entrepreneurs just get on with it and carve their own path without waiting for someone else to do it for them. They’re men and women stubborn enough to stick two fingers up to hordes of nay sayers because they know that they have a great idea.

Successful entrepreneurs don’t take “no” for an answer, they keep plugging away until the rest of the world catches up

Fear of disappointment, rejection and lack of drive or self-belief… these are the passion sapping enemies of success.

If you don’t try things that you truly believe in just because someone else doesn’t think it’ll work you’ll never get a project off the ground. Sara Blakely was laughed at, ridiculed and told she was going about everything the wrong way but kept on going regardless.

We live in a world that’s constantly bubbling and changing, but at the same time it’s a place that can seem very resistant to new ideas…

Go to a bank and ask for investment in a wacky sounding invention (like, for example, a pair of body firming tights) and the chances are they’ll turn you down.

Why? Because on the whole banks don’t like taking risks (unless of course they’re risking our money). They like to invest in businesses or ideas that they *think* are safe, that they’ve seen working before.

And it’s not just banks…

We’ve all seen episodes of Dragon’s Den where the po faced millionaires have suddenly got cold feet about an idea because the presenter’s said something that wasn’t pitch perfect or got muddled on an issue – and these are people who have been in that position before! If they’re happy to put obstacles up and dash people’s dreams on a whim then you can be sure that others will do the same.

Fortunately we live in a time when buyers can decide whether we’ve got a good idea or product, not investors or theorists. And unless you’re developing a 70 tonne jet engine powered by Mars dust you can develop and test ideas without taking out a second mortgage.

Don’t just think it, do it.

If you’ve got an idea or an invention and are looking for investment, support or further inspiration here’s a great place to start:

I’ve leave you with a quote from Sara Blakely:

“Now I give speeches and I always ask: If no one showed you how to do your job, how would you be doing it? Take a moment and ask that question. Often your way is better. Maybe it’s a fresh new approach. If you are doing something the way that everyone is doing it, you are not really creating change by doing it that way.”