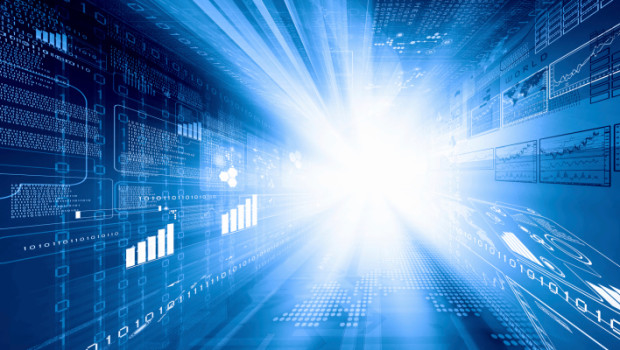 This is as near perfect as a web host can be

If speed, reliability and security are important to you take look at this. This is essential reading for anyone who runs (or is thinking of running) a WordPress website.

I’ve been testing WP Engine for 6 months now alongside 4 other well-known web hosts: Synthesis, 123 Reg, 1&1 and Justhostme (notwithstanding the multitude of hosts I’d tried prior to that).

I can happily say right off the bat that this is easily THE best WordPress web hosting provider I’ve ever used.

They’re not the cheapest BUT if you’re looking for blistering speed, cast iron security, automated backups and a number of other nifty features, you need to take a look.

Before I launch into this review I want to make something clear.

What I mean by that second point is don’t get this as a shiny new toy just for the sake of it. If you’re just starting out online on a low budget and need to keep your costs down, I can very much recommend these guys as a starter package. You could always upgrade later.

WP Engine is for anyone who needs speed, reliability and security.

In simple terms this is the fastest host I’ve ever used – by a long, long way.

Here’s a screenshot of my page load speed before: 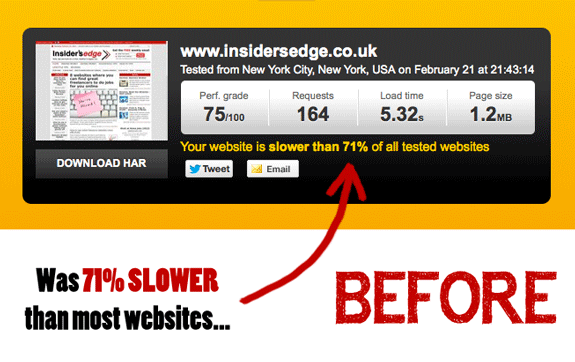 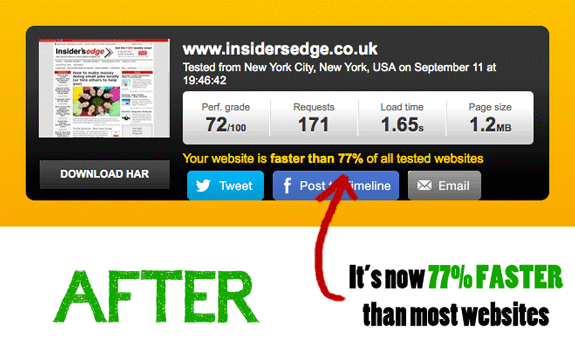 Now this is a speed test using ‘Pingdom’ a company who constantly monitor and track the load speeds of millions of websites. Their customers include Microsoft, eBay, Google, Dell and Pinterest. The results you can see above are snapshots taken at those specific times but these are typical results.

Having done work for other clients I’ve tried a multitude of shared hosts in the past (like 1&1 and 123 Reg), I’ve also tried VPS servers (the next level up in hosting) and I’ve tried high-end dedicated servers (the top level) charging an eye-watering £150 a month (If you’re a bit technical you’ll understand this jargon, if you’re not don’t worry).

WP Engine beats the whole lot hands down. I don’t know what wizardry they’ve employed to get their results but it works and it works consistently.

Reliability: The site is ‘up’ and online more than 99% of the time

I’ve had virtually no downtime in the last 6 months.

This has never actually happened to me before but here’s a screenshot for July – August: 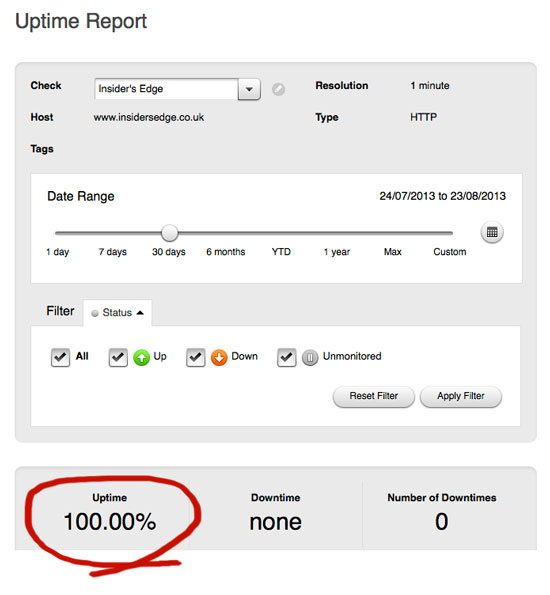 With every other host I’ve used they’ve ‘claimed’ 99% uptime but have never actually delivered (I’m not sure why they’re allowed to make such claims). I frequently found the site going down for half an hour every now and then, sometimes longer, which can be extremely frustrating.

This 100% uptime record doesn’t happen every single month (normally there is some downtime) but instead of days or hours it’s now seconds or minutes. For example in April this year my total downtime over the whole month was just 2 minutes.

The reliability of this host is phenomenal.

I don’t need to stress why this is crucial. If your website goes down that means you’re getting zero visitors… which in turn means you’re losing potential readers/buyers/subscribers.

Backups and Security: Your website is backed up automatically in case something should go wrong

There are a number of plugins and third party services that will back up your WordPress (some free, some paid – I’ve touched on a few of these in Insider’s Edge).

Backups are included as part of your WP Engine hosting package in a ‘hands free’ way so you don’t need to faff about with additional plugins or back up space or paid services.

Every night your entire site and database is automatically backed up on their servers, which means if something bad happens – such as your site getting hacked, or a freelancer mucking around with your site and breaking something – you don’t need to worry.

You can instantly revert to a previous ‘saved’ version of your site from yesterday, the day before, a week before, even two weeks before. I say instantly – it depends on the size of your site, but typically I’ve been able to restore previous versions in around 30 seconds.

It’s a seamless process that can be done in a couple of clicks and you’re notified by email once it’s done.

You can also make additional backups with a couple of clicks in the WP Engine control panel. This is handy if, for example, you’re upgrading to a later version of WordPress or upgrading a plugin and you’re not sure whether it’s going to affect your site.

By quickly backing it up beforehand you can make any upgrades and if something goes wrong for whatever reason you can simply revert to the saved version.

My favourite feature: They have a ‘staging’ facility

This is one of the things that sold me on WP Engine in the first place. If you’re anything like me you’ll like to tweak the design and features of your site from time to time. The problem is when you tweak your site you don’t want any ‘experimenting’ to be seen by your regular readers/visitors.

I’ve had times in the past where I’ve been trying to change a font size on a particular menu, clicked save and then successfully broken the look of the site because I’ve accidentally altered the wrong thing. Anyone visiting Insider’s Edge while I was trying to sort the mess out would have been greeted by an array of weird fonts and tumbling images. It looked pretty shoddy.

WP Engine have a funky little facility called the ‘staging facility’ which I’m pretty sure no other web host has as yet. It basically copies your entire site onto a temporary domain so that you can play around with it. You log in as normal and make any changes you want, but your ‘real’ site will remain unaffected.

The really clever bit is that once you’ve made changes and you’re completely happy with everything you can then copy those changes across to the real site in a couple of clicks so that you don’t have to do it all over again.

They’ve actually built it into WordPress – it’s two buttons that look like this:

It’s hard to emphasise how useful this is. Another example of where it’s come in handy is when I’ve hired a freelancer to put in some design changes to Insider’s Edge. Sometimes when you hire tech guys from a site like elance or Odesk you’re flying blind. Reviews and ratings are great but sometimes the most highly praised freelancer can make mistakes and cause havoc.

I had this a few months back when I was helping a client and the chap we hired could not have done a worse job. Not only did he NOT do what we asked of him, he steam rolled his way through the site breaking bits and caused an almighty mess which took hours and hours to fix.

This entire situation could have been avoided if, back then, we’d had the ability to get him to work on the website in a ‘staging’ environment. If he had broken anything in ‘staging’ mode it wouldn’t have mattered in the slightest and I could have quickly given him the boot without worrying about any mess he’d left behind. For this feature alone I would pay a premium.

Support: Quick to respond and they now have an excellent live chat facility

When I very first started out I experienced a couple of hiccups and sometimes I didn’t really feel they understood my queries properly which led, on a couple of occasions, to a frustrating merry-go-round. With that said they were still excellent compared to most web hosts. But now they seem to have really put support at the top of the agenda and their customer service is nothing short of excellent.

WP Engine recently introduced a new feature called ‘Live Chat’ which enables you to have a live text chat with a member of support (a bit like using Skype). I used it for the first time today and I was impressed. Because it’s ‘live’ you can get to the heart of the issue very quickly.

It feels like WP Engine have really listened to customer feedback by introducing ‘live chat’ and they have gone that extra mile to provide a really useful tool here. When I used it I was chatting to the rep about a query I had with their security plugin. The first thing he came up with wasn’t right but it didn’t matter because I was immediately able to explain exactly what I meant and we got it fixed there and then. On email it would have been lots of back and forth.

It’s worth pointing out that WP Engine are based in the USA which means that if you’re from the UK (like me) or another continent then you need to bear in mind that their support hours are different. You won’t for example be able to get an immediate response at 9:30am GMT because they’ll all be in bed. This isn’t something that’s caused a problem for me as yet as I’ve tended to contact them in the evening anyway but it’s worth bearing in mind.

I’ve been so impressed with my experience using WP Engine that I’ve since moved several other sites onto their platform so you can’t really get a higher endorsement than that.

If you run a number of sites there is a package which lets you host up to 10 sites – which works out cheaper than the single site package. They also include something called CDN on this package which can help your site run even faster when accessed from abroad. I won’t go into the technical details but it effectively hosts a version of the site on different servers across the world to shave a bit of time off the load when accessed by someone from another continent.

All in all I’m extremely happy with WP Engine and they get my highest recommendation. 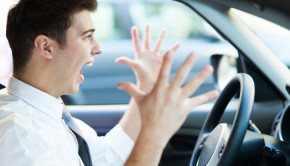 Could you make £2,000 a month by sticking these magnetic plates onto the side of your car? → 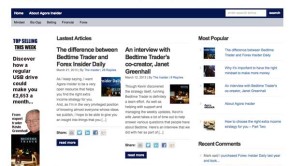 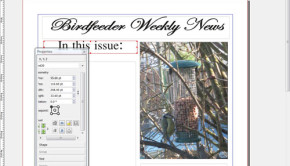 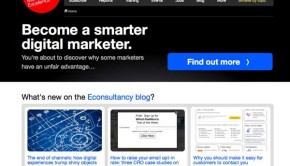